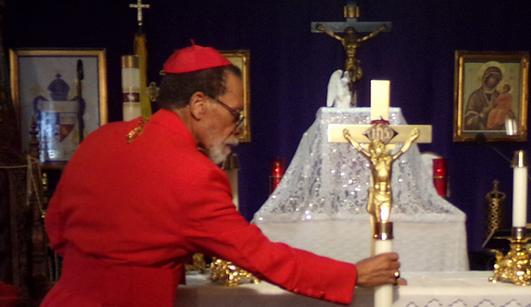 "Let us not seek the Republican answer or the Democratic answer, but the right answer."

"Government's first duty is to protect the American people and not run their lives.

Freedom is never more than one generation away from extinction. It must be fought for, protected, and handed on for them to do the same"

Cardinal, Archbishop Bobby Land waits at the altar to hear the voice of God

It is no secret to most Americans that in this season of great challenge and political warfare Washington is in need of a "Changing of the Guards." It is imperative that God's Priest stand faithfully at the Altar, that they may give sound and moral direction to a Nation that has lost its way.  God looks for his servants to be a forceful, and when necessary a militant voice even on Capital Hill. A voice that matters. A voice that cares about the welfare and souls of all Americans.

So now as we behold our present times and conditions it is not hard to discern that tyranny lies at our doors of freedom in this American season. So much is at stake in the arena of American freedom. Did not our great founding father Thomas Jefferson say, "We hold these truths to be self-evident: that all men are created equal, and are endowed by their creator with certain unalienable Rights, that among these are Life, Liberty and the pursuit of Happiness."---That whenever any Form of Government becomes destructive of these ends, it is the Right of the People to alter or to abolish it, and institute new Government, laying its foundation on such principles and organizing its powers in such form, as to them shall seem most likely to effect their Safety and Happiness. Prudence, indeed, will dictate that Governments long established should not be changed for light and transient causes; and accordingly all experience hath shewn, that mankind are more disposed to suffer, while evils are sufferable, that to right themselves by abolishing the forms to which they are accustomed. "it is the great parent of science & of virtue: and that a nation will be great in both, always in proportion as it is free." "our liberty depends on freedom of the press, and that cannot be limited without being lost."